...takes the premise of the movie Rise of the Planet of the Apes and lets you play as a group of Apes escaping a laboratory on their quest to reach freedom in the woods.

But that's not all:

Rise of the Apes also introduces the RISE system which transports the idea of evolution into the game system to create a truly evolutionary game experience and our own STRENGTH tracker to adjust your game according to the presumed threat of the apes.

What you can expect?

Rise of the Apes comes as a 16 page pdf filled with all the goodness to run this game:

"Rise of the Apes is cool! The evolutionary structure is a great idea."

"LOVE the idea of character growth within the system!"

"... a fantastic and evocative system!"

"It is narrative first and the characters (and character sheets) evolve throughout the course of the game which fits the story it is trying to tell perfectly!"

To provide you with the format that fits your needs best Rise of the Apes comes in 3 shapes:

We don't do funding the common we. We decided to invite our editors and sensitivity readers for dinner. Here's where we stand so far: 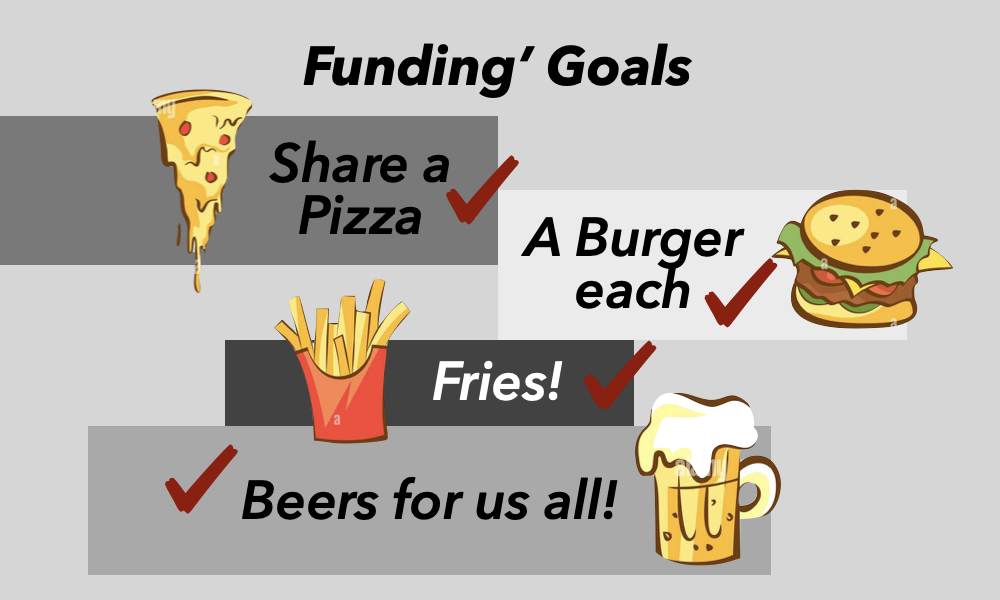 In order to download this evolutionary game you must purchase it at or above the minimum price of $3.33 USD. You will get access to the following files:

Some inspiration from the movie Rise of the Planet of the Apes on how a break out could look like.

Rise of the Apes was listed as one of the New Releases on Gizmodo in this article: The Gaming Shelf: Tabletop Gaming News and Kickstarters (gizmodo.com)

Another great game from WuDeRPG! The mechanics are lightweight but not the same roll every time. The evolution of the characters is cleverly done but my favorite aspect is the connections created among PC's and NPC's. This both provides mechanical benefits and narrative story points. These combine to create a "stronger" game. Apes strong together!

Thanks for the kind words and sharing with us your favorite design bit.

The idea mechanically reflect Bonds among PCs and between PCs and NPCs in the game's design is one of the things we are very proud of in Rise of the Apes!

Trailer to Rise of the Planet of the Apes that inspired this game.

It's worth to watch the movie for some additional inspiration!

Rise of the Apes is an awesome game! It is narrative first and the characters (and character sheets) evolve throughout the course of the game which fits the story it is trying to tell perfectly. In short if the blurb sounds at all interesting to you pick this game up!

Thank you so much for your kind words! I am very grand that you enjoy the evolution within the game.

Rise Of The Apes is a tabletop system for playing through the new Planet Of The Apes trilogy.

The PDF is 16 pages, with a layout that's slightly cramped in a few places but otherwise flavorful and easy to read.

Contents-wise, Rise is very narrativist and very structured, but not always clear about what that structure means. The game goes through specific acts focused around canon setpieces, and the game's mechanics change as the players progress through these acts, but the GM really has to work to keep the game in a gamelike shape rather than a freeform roleplaying exercise.

The core resolution system is d6 pool, count 4+s. The pool is built from a stat, your relationships with other characters, several miscellaneous bonuses, and a floating bonus based on how organized and unified your overall group of apes is.

Skills also exist, but don't seem to do anything. They're simply a reflection of what your points in a given stat mean for your character.

There are also HP bars that show up during the final act, but no clear guidance for what happens if they run out.

And there isn't really strong guidance on how the game is supposed to end, nor hard mechanical endpoints for the individual acts, so having a GM is kind of essential for pacing and progress.

There *are* GM resources, both in the form of written advice, a character sheet, and the game's pre-planned structure, but if you're not already comfortable GMing, this might be a little tricky to run.

Overall, if you're a fan of the Planet Of The Apes prequel trilogy, you're willing to wing it and use the rulebook as a rough outline, and you like mechanics that unfold and change during play, this is a neat game with a lot of good ideas and worth checking out.

Thanks for the review! Really appreciate the constructive feedback!

Wow! LOVE the idea of character growth within the system!

Can't wait to see what else you do with the RISE system. Heard some chatter about a Mech game?

Hey! Thanks for the kind words. Yeah, character growth is what we are really interested in and so creating a system that reflects this was just something we really like to do. We did something less structured but similar in Hiron and Mariann: Soul Detective.

The chatter is true, we are thinking about a Mech game focusing on the mech pilots and how they learn to be pilots. Let's see where this idea takes us.

Loved the story of Mariann and how it evolves.

Love Mech game focusing on learning to pilot. Reminds me of anime.

As i said in my 5-Star review (which are private on itch so im reposting here):

Rise of the Apes is a fantastic and evocative system, that creates a game in 3 act.

If you don't want to stop after act 3: the very simple but incredibly flexible Rise and Strength systems could be easily applied to continue the franchise or spin off in your own direction by applying a new set of 3 scene acts in the same manner presented here.

I look forward to the time i can find time to play it!

Thanks for the rating and this awesome review! Let us know how it goes once you find the time to play!

Is that supposed to be "High Threat" or "High Thread" in the right side category?

haha, I can't believe I didn't see that earlier. Thanks for catching that.

Well, if you're ever in need of an editor... you know how to reach me!

HAHAHA!  Under "But that's not all": the presumed thread of the apes.

*insert flip the table gif* This is high school all over again! Spelling is my personal BBEG! 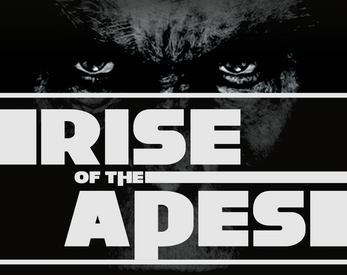 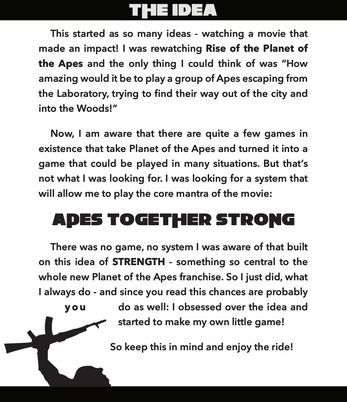 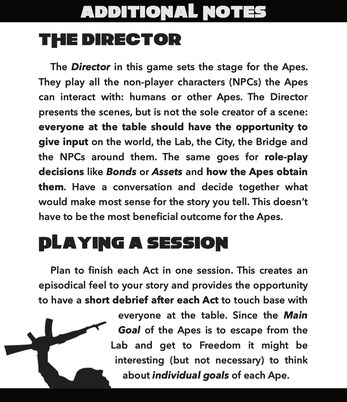 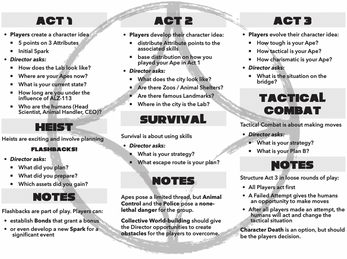