五德 (Wu De) - The Five Powers is a narrative RPG - a Shared Narrative. It is setting agnostic, which means it you can play 五德 - The Five Powers in any setting you choose. Creating your own setting is part of setting up your unique game experience.

五德 - The Five Powers is like the Base Game/SRD of the Element Dice System. It is a toolbox for your own creations!

五德 - The Five Powers is powered by the Element Dice System, a system based on the east-asian philosophy of Yin & Yang and the 5 Powers, or Elements.

The game requires only 6 d6 in two different colors (3 white dice, 3 black dice - or any 2 colors you choose). But you can easily create your own Element Dice with some creativity.

You can find the full game here!

Use WuDe as an SRD

The game mechanics in WuDe - The Five Powers are a basic game experience you can easily hack. There is already a whole group of games from two game jams that show how versatile the Element Dice System is.

To use the WuDe - The Five Powers as SRD for your game, simply attribute us in the following form - and drop us a message on Twitter @wuderpg, so we can cheer you on:

You can use this png in your game booklet: 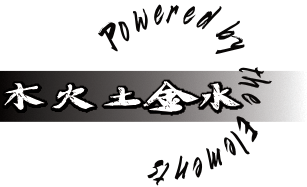 Powered by The Elements

You can also find a Quick Guide here.

There are already too many Element Dice games to give a shout-out to all of them, but we want to highlight some that are exceptional or currently itchfunding:

Clean-Up Crew is currently itchfunding for artwork from a diverse team of 6 artists from around the world and with representation from the LGBTQ+ community. Clean-Up Crew is a fast paced power fantasy, illuminated by LUMEN. You play Cleaners that get called to clean up Messy Cases for Soul Detectives, and that means one thing and one thing alone: Kick serious Monster Ass!

Mariann: Soul Detective is the dark and somber counterpart to Clean-Up Crew. Mariann is a quiet game for two that takes you through the transformation from a gifted young person to a Soul Detective - equipped with magic powered by the 5 Elements!

The Moment You Were Born

The Moment You Were Born is probably the most unique experience you will come across here on itch - so exceptional, that we didn't call it a game to avoid any misunderstandings. But it still takes the Element Dice System and uses it in an extraordinary way.

An Affair of Honor

Sacred Forge by the talented Cat of Peach Garden Games is currently itchfunding to support the Actual Play Podcast Roar To Heaven of their LUMEN game Blazing Hymn - everything excellent!

Sageuk! - Roleplay in Joseon by Hessan Yongdi showcases the 5 Elements in a historical Korean setting and provides great guidance on how to use regular d6 with the Element Dice System.

Support this SRD at or above a special price point to receive something exclusive.

If you have claimed WuDe - The Five Powers for free or through a charity bundle and feel you would like to contribute to this game, this is your opportunity!

If you want throw me a coin but can't afford the full price, you can also head over to my Tip Jar.

A fantastic way to tell stories together, with a dice system unlike anything else.

Thanks for your kind words!

Wu De is a GM-optional storytelling trpg that is all about its core dice system, and honestly it works.

You roll two colors of dice, representing opposite polarities. Each numbered face represents an element. The elements and polarities cancel each other out, and on a net neutral roll your action succeeds.

This sort of goes the long way to recreate Fate's net neutral dice pool, but Wu De adds three mechanics on top of that that give a lot of manipulatability and context to the dice. First, any surviving dice give context to what happens next through their element and the things it's associated with. Next, rolling a positive 6 (or Qi) lets you choose a negative die and cancel it out. Finally, you can bank negative dice for future rolls.

Essentially, you ignore failures by moving them to a separate track, and after enough of them have built up there, you get a scene dedicated to things going really wrong.

This gives the (optional) GM a great way to introduce new conflicts and advance plotlines, and it gives the players a lot of control over when they succeed.

Setting-wise, Wu De is a bit like Fate, where the system is meant to be useable for anything. The book comes with four settings, each with a number of hooks, but it expects the group to collaborate and fill in world details as they come up.

Overall, Wu De is a cool storytelling rpg with a dice system that made me rethink how dice operate. I would recommend it to anyone who's comfortable with Fate, or with card-based storytelling games.

-Page 12. If you have a yang Qi, can you only apply it after the elements have destroyed each other, or can you apply it before that, potentially preventing a yang element's destruction?

-Page 15. When you bank a yin die, can you do this before the elements destroy each other (potentially preventing a yang element's destruction)? Or does it have to be after?

-Page 15. If you bank a yang die, does it cancel a banked yin? If you bank 3 net yang dice, do you get a scene dedicated to your situation improving? Can you bank yang dice to save them from being destroyed by yin dice / yin elements?

Thanks for your kind words! Fate was indeed partially an influence when I created the Element Dice System.

Thanks also for your questions. Here are your answers:

You can also read here a bit more on the interpretation of the dice.

Anyone looking for a more cooperative storytelling game with unique features will absolutely love this game. The specialized dice are am added feature as are the East Asian elements incorporated into the mechanics.  It's been used in teaching students problem solving and social interaction as well!

Thanks for your review!

Hey! I have played it with groups ranging from 2 to 8 players. The game is player driven storytelling, so having too many players can cause some of the players not having that much input. It is important to allow all players to create the story so 2 or three creative players is great.

Understood! Thank you very much for the reply! 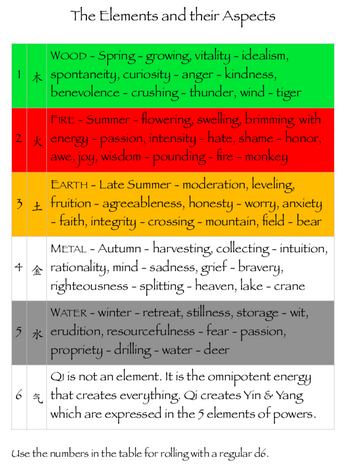