歸妹 - Returning Maiden  is a story driven Partner Game based on the ancient Chinese legends of Chang'e and the archer Yi. In this Shared Narrative, you will take on the roles of Chang'e and Yi and will retell the story of how you found back together.

歸妹 - Returning Maiden was created with the Element Dice System in mind, but it is a standalone game that can be played with regular dice (d6). All you need is 6 dice (3 black and 3 white) and you can go on your journey as Chang'e and Yi to find back together!

歸妹 - Returning Maiden  is used as reference for submissions to the FivePowersJam.

The game is formatted in A5 and has 20 pages, so it can easily be printed on A4 paper and turned into a little booklet.

In order to download this mythical partner game you must purchase it at or above the minimum price of $7.25 USD. You will get access to the following files:

Support this mythical partner game at or above a special price point to receive something exclusive.

I played this with my partner for a little bit each evening over a week and completed it today.

It's a nice theme and a gentle cooperative game, which made a refreshing change for us.

On the downside, it took me a long time to prepare for play, because I found understanding the moment to moment play from the rules to be overly difficult. To get a grasp of it I also had to download other rules from elsewhere, and some didn't apply to this game, some did. Ideally this would include all the rules you need to play.

My biggest confusion was just the basics. The rules don't tell you how many dice to use; whether both players have their own pool or if the dice are shared; whether any get returned as they complete elements or if the hand gets smaller. Do you save one of 8 elements you need each time, or only if you roll it, or only if you roll it AND have success according to the other rules linked to? I was forced to guess, and if a player makes the wrong setup choice it might be unplayable. I'm happy with flexibility, but the basics should be clear so you have a basis to alter from. In the end I played with 8 dice, 4 yin and 4 yang per player, with elements recorded on paper rather than setting dice aside.

Maybe if the rulebook also had a few pages of example rounds that would have made the world of difference to playability and helping new players. It could include an example of storytelling, when the dice were rolled, how they were resolved and interpreted, then pay passing to the other player, and so on for a few rounds. That would clarify any ambiguity. Ideally the rulebook would also have a repeat of any important tables at the end so you could just print those out (which elements beat which; who tells which parts of the story; what the goal is etc).

I raise these issues because they might put off a casual player who isn't as persistent as me, and that would be a shame when there is an interesting core to the game that a lot of people would enjoy. Maybe a revamped rulebook is all that would be required to make this really shine. Good luck with the future!

Thank you for your comment, I appreciate the feedback a lot.

歸妹 - Returning Maiden is one of my first games created for an event to promote and teach about the Intangible Cultural Heritage of China to Chinese youth - the event leader was in fact translating the myths into English and reading the rules for cultural sensitivity - just as she did with 五德 - The Five Powers.

A revamp is actually on the schedule for later this year to address exactly your issues with working out the rules for people unfamiliar with the Element Dice System and streamlining the gameplay.

Thank you again for taking the time to comment and give feedback. I hope you found inspiration in the Element Dice System and what possibilities lay in it.

Thanks for replying - I hope I didn't seem too negative! I'd just like more people to be able to play it. :-) I recorded the sessions since I'm an author, and a few of the things we made up may well find their way as altered scenes in future short stories. :-)

Hey, no worries. I believe every critique is an opportunity for me to get better and you took the time to be specific and I appreciate this a lot. It is also an honor to hear that some of the scenes were an inspiration for you to take into your future writing. 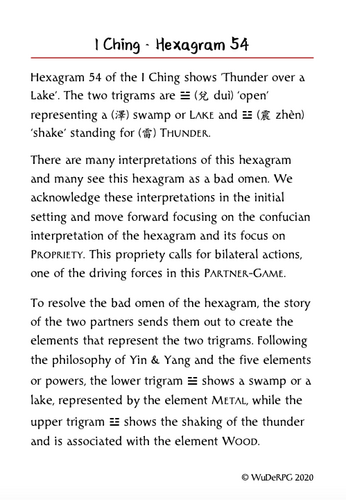 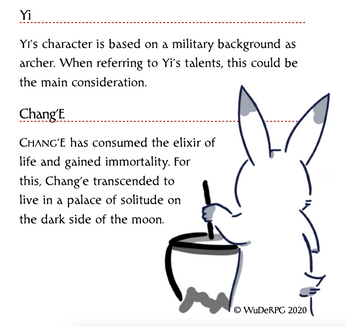 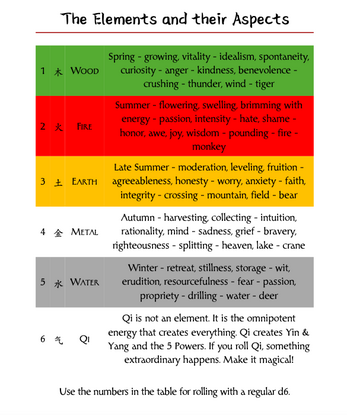